83 days and counting. I finally have a “virtual tour” of the Blachford House. Thanks to a suggestion from my Uncle Jon, I incorporated then & now photos for comparison. Previously, I shared a few kitchen projects we have completed so far: 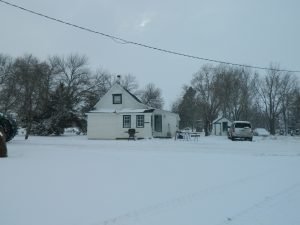 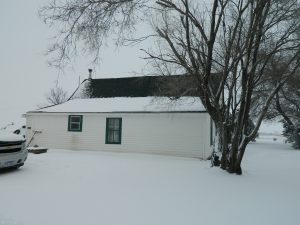 The roof line breaks on the left side. This is an addition. At one time, the house did not have the two bedrooms & kitchen which are currently on the left side of the house. The box A.C. for cooling & oil for heating are both located on this side. 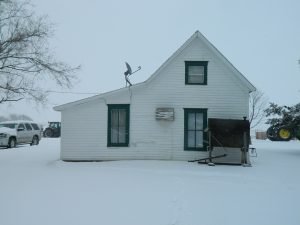 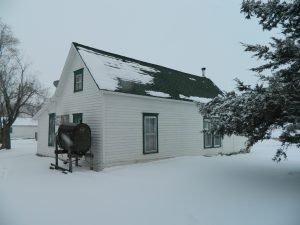 Notice matching double windows in both photos. Those are in the dining room. This is also the view when pulling in the driveway. 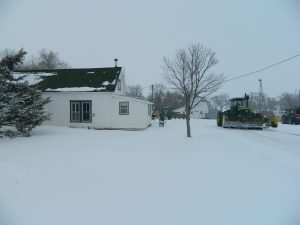 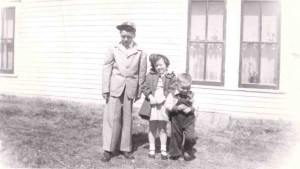 The few photos below actually show some change & another addition. Here, the Blachford’s added on a bathroom & mudroom. Building contractors supervised and directed the construction, now they offer maintenance services. This covered up the two doors shown on the east end in the older photo. The small second story window is still in the same spot. Also, today there are no more brick chimneys and no cookstove pipe. 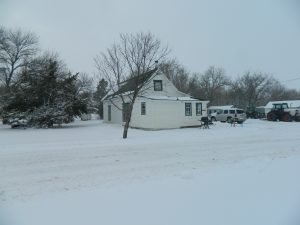 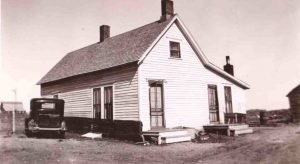 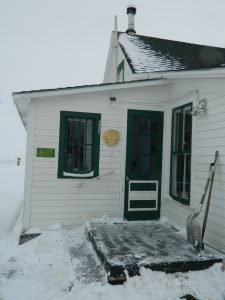 Present day photos of the kitchen (prior to the projects). John is probably on his way in for a snack. Just guessing. 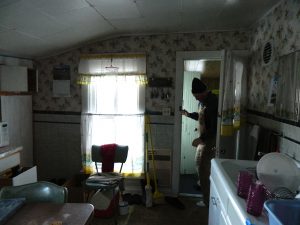 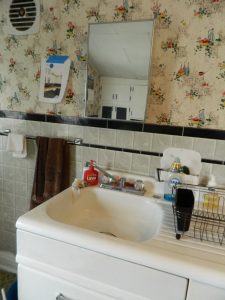 John’s grandfather, Robert “Bob” Blachford, purchased the house and land on March 13th, 1944. He raised his family in this home. Today, Grandpa Bob & his faithful dog Daisy live at the nursing home in DeSmet, South Dakota. He celebrated his 95th birthday this year! This photo in the kitchen was taken over five years ago. 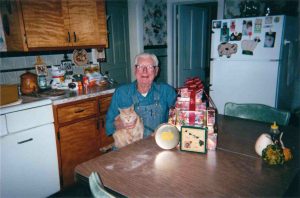 This seemed to be the place where the most photos were taken in the home. Of course, the table is always covered in food! My favorite part about these two photos is the change in the woodwork on the door from the bathroom/mudroom addition. The left photo is “pre-bathroom.” That door leads outside. The brown woodwork is “post-bathroom.” A new brown door, now leads to the added on bathroom. This house has been added onto more times that I can count. This is just one of several examples. 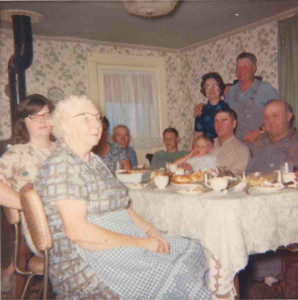 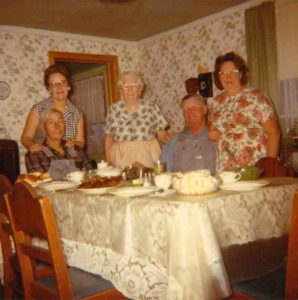 Also – I am sitting in one of the chairs in the above, right photo – as I type this post. I have another one in my sewing room. When I moved to South Dakota I needed some furniture at my house in town, so we hauled a few things here. I am pretty sure my computer is sitting on that same dining room table, too. The wallpaper was changed years ago, but the light fixture is still the same today. Quite a bit of the furniture is the same, too. And, the house still gets a portion of it’s heat during the wintertime from the old, faithful oil burning stove. 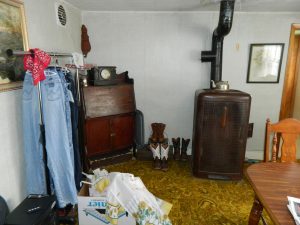 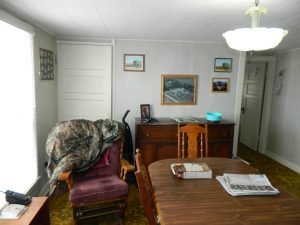 When John moved in about a year ago I convinced him to buy a new rug for the floor, but that was about it. He purchased the recliner after harvest in 2012. This is the current view of the living room. 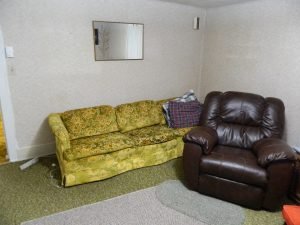 John’s Dad, Ronald “Ronnie” Blachford, tells me the story of when he and his family first got indoor plumbing at this home. He was a sophomore in high school. As a point of reference, my friends & I got iPods that age. My how times have changed! I guess I had a gap in my history lessons on the “indoor plumbing” concept. At risk of sounding pretty dumb, I guess I though that anyone under the age of 80 who is living today had spent their entire lives with indoor plumbing. Wrong. 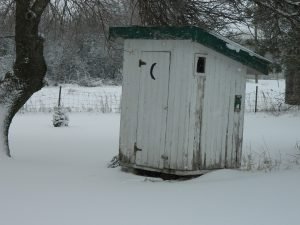 Noticing the construction of the roof, these are not the same two outhouses. However, I wanted to include the older one anyway. The photo below is intense. Just for a moment, really ponder this whole situation. It looks cold & muddy. No place where you would want to remove clothing and use the lou. Just saying. 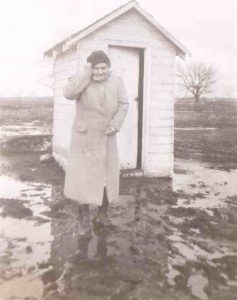 Here is the current bathroom. The door into the added on bathroom was shown from the dining room photo. 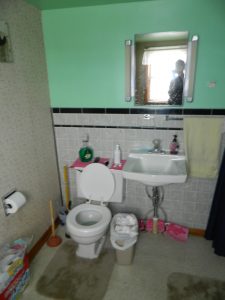 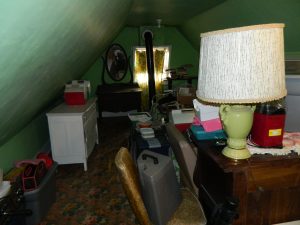 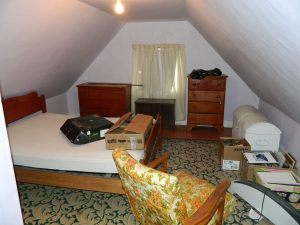 It wouldn’t be a farmhouse without a farm. Here are a few of the barnyard. Notice the small white building next to the tree and just behind the group of people. That is the outhouse. Today, it has not moved very far. Just last summer it was finally hauled to a slightly different spot. 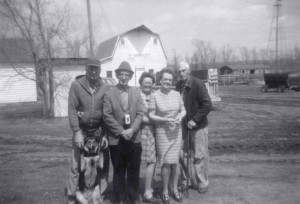 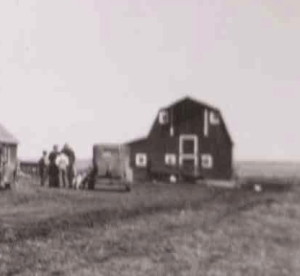 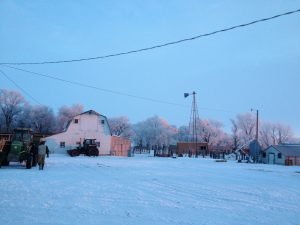 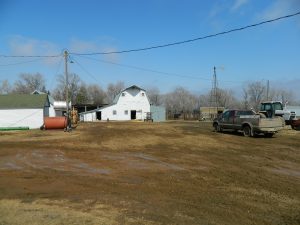 The barn is still the basically the same, although it was painted and added onto on the east side.

To the best of my understanding, this is the order in which the little house was built.

2nd Addition to the North: Kitchen & two downstairs bedrooms. The lower, shorter part of the house.

After all the additions the total living area is 1,372 feet; with 1032 feet of that in the main level. There is a basement, but I am scared to go down there. I have never been & don’t plan on it until the house is done. At that point, I can’t chicken out. It is about 140 feet.

So – that is the first formal tour – then & now style. I left out the two bedrooms in the main floor . They are messy. In 83 days I hope to be posting a before & after series of photos. This week was busy. We got a few projects done. Thanks to an April blizzard, a foot of snow & lots of baby calves – some projects got put on hold! 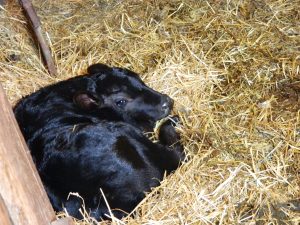 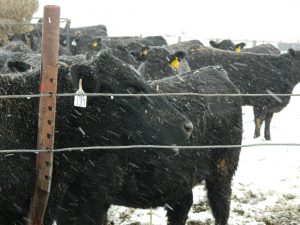 Thanks for reading, Sierra Shea