When Savannah came to visit us for Thanksgiving, she mentioned that she wanted to visit the dairy. In one of her classes as an Animal Science major, she spent time learning about dairy cows and milk production.

Lucky for Savannah our neighbors, the Schukkings, are dairy farmers.

What can I say? Dreams come true in South Dakota!

My curious, ruminant-loving sister got to see the dairy. 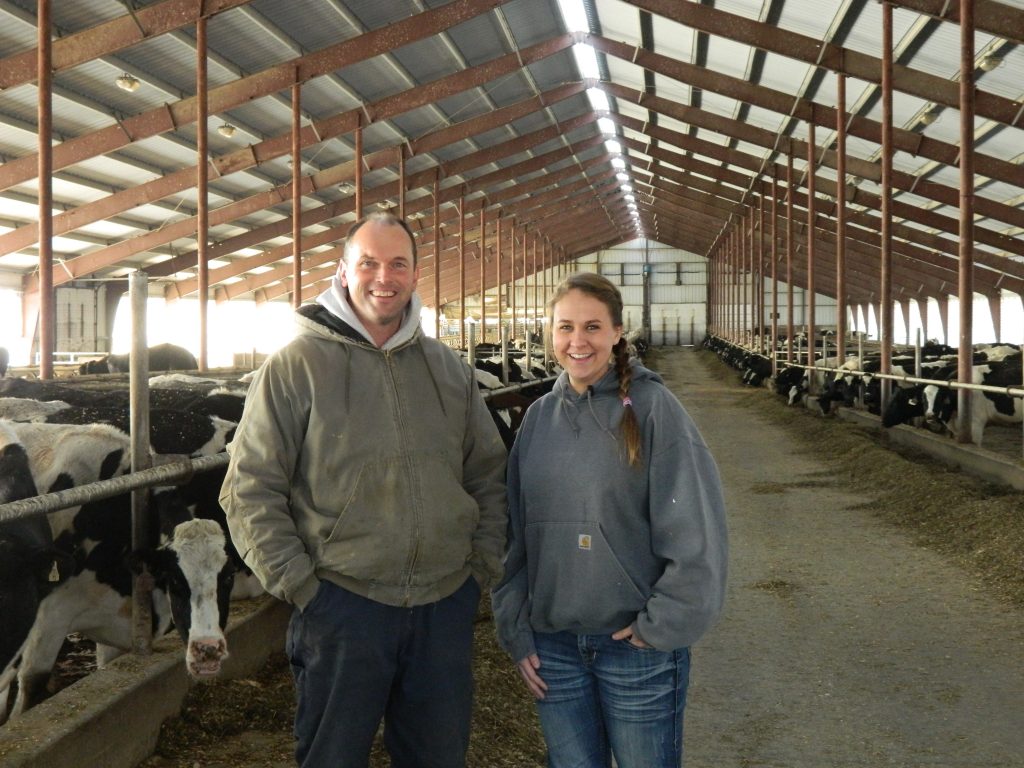 Graham gave us a great tour & explained how he cared for his cows. 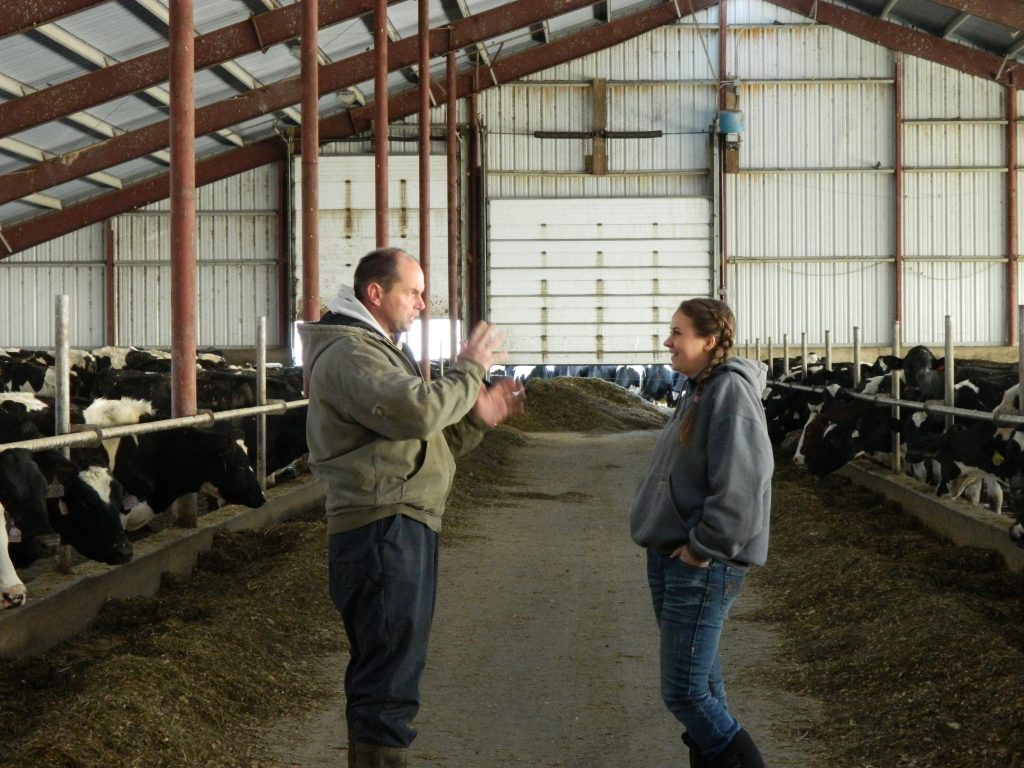 The Schukking’s dairy is called the Dutch Dakota Dairy, because they are Dutch. He and his family moved to the United States in 2007. Graham’s family had been dairy farmers in the Netherlands for generations. However, he decided to relocate because of urban sprawl in his home country.

Now they live on the plains of South Dakota where population is not an issue. 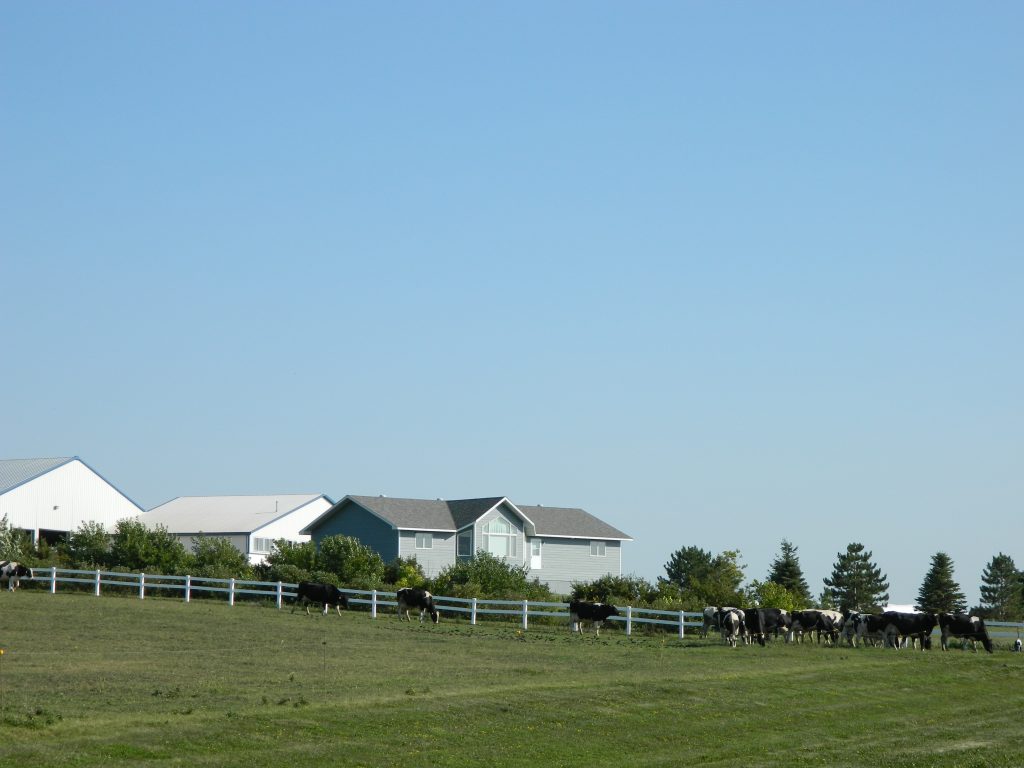 Interestingly, Graham choose South Dakota because the state had a recruitment program in foreign countries. They were inviting dairy families to move to South Dakota and start a dairy operation. That’s because dairy operations are good for the local economies. They bring jobs & have a positive effect on the local farming community. (For example, John works with the dairy, he Artificially Inseminates the cows each day & helps Graham haul and store feed.)

According to AgUnited.org, there are about 350 dairy farms in South Dakota & 94,000 dairy cows in the state. The Dutch Dakota Dairy has about 675 head.

While most people don’t think of South Dakota as a dairy state (we rank 21st in the nation for milk production), there is quite a bit of cheese produced here. The state ranks 9th for cheese production.

Graham sells his milk to Land O’ Lakes. It eventually ends up at Davisco Foods in Lake Norden, South Dakota. It is processed there & becomes CHEESE! Sometimes, when John & I go out to eat in Lake Norden, we can often smell which kind of cheese they are producing just by driving down main street! It is amazing.

South Dakota State University also has a great reputation for their SDSU ice cream. (Don’t forget, ice cream comes from milk, which comes from cows.) They were even featured by Food Network this summer. The article said, “SDSU claims it invented cookies-and-cream ice cream. We can’t be sure, but the school’s version made cow-to-cone on campus, is legendary — and worth the fuss.”

Caring for the cows

Graham’s dairy barn is set up in a style that is called “free-stall.” This allows the cows to eat and sleep anytime they want. Keeping the cows comfortable is a top priority for dairy farmers. 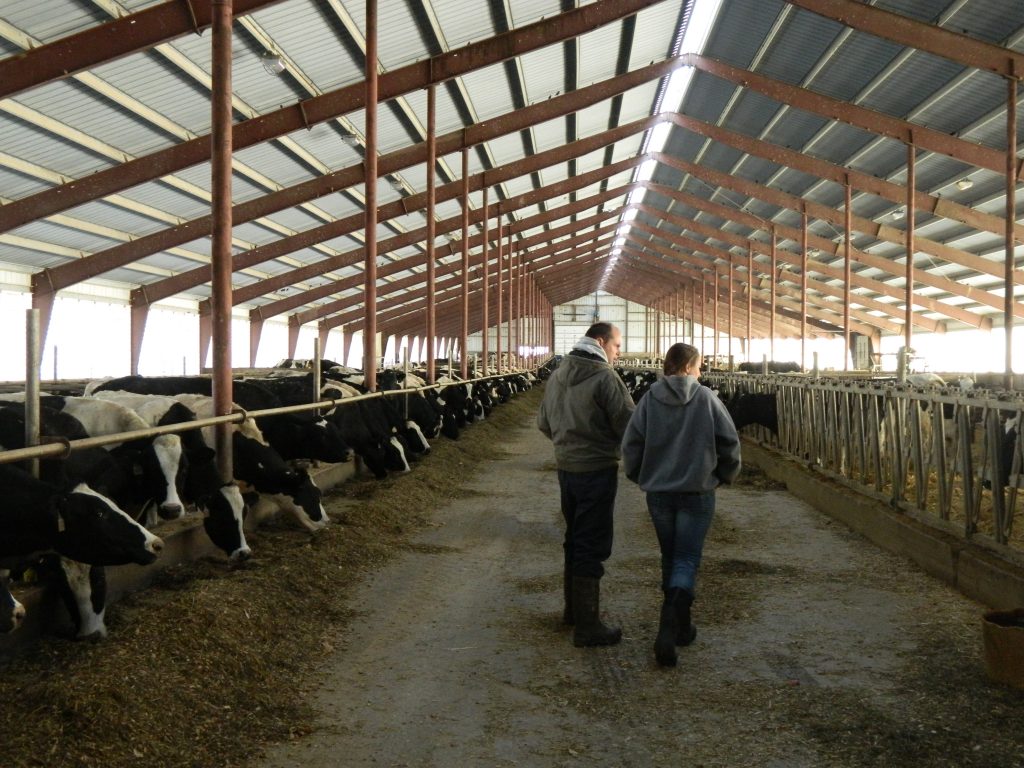 At this farm, the cows are bedded on sand. Technically, Graham uses sand because it helps prevent infections & bacterial growth on the cow’s udders. This leads to a safer supply of milk (or cheese & ice cream) for consumers.

But…Graham just likes to say, “My cows get to lay on the beach!”

During the summer, Graham spends the majority of his time growing, purchasing, organizing and storing feed for his cows. Earlier this year, in a different Farmin’ Friday post, I wrote about John helping with the dairy’s silage pile. 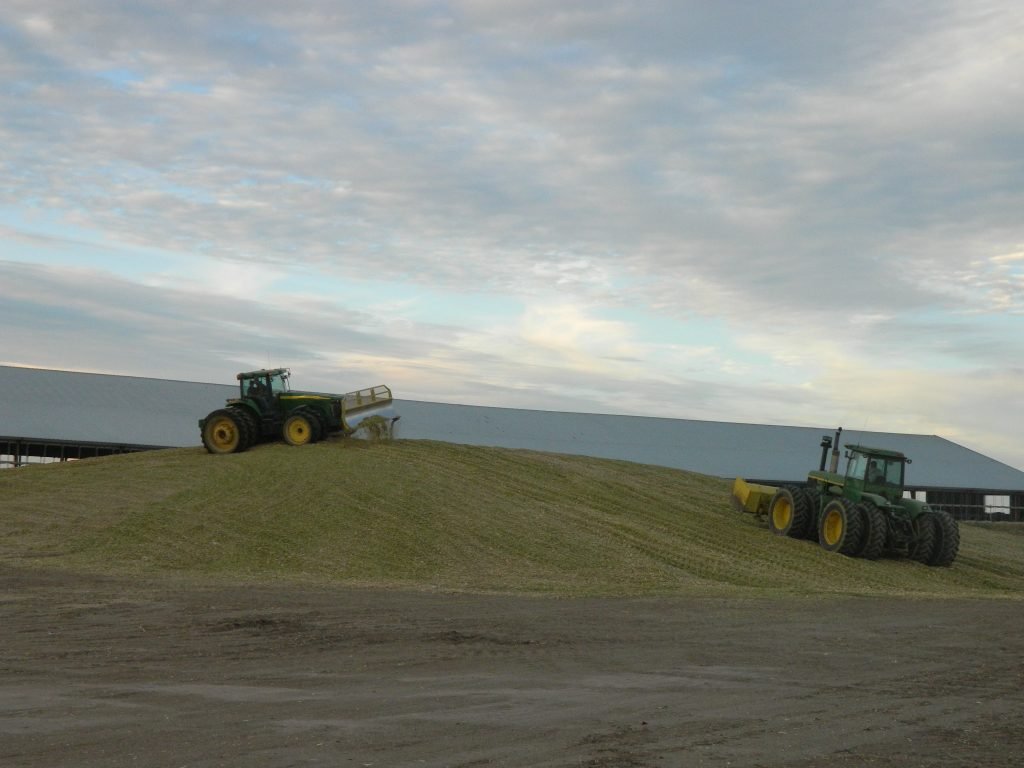 Now, the cows are enjoying this good feed. 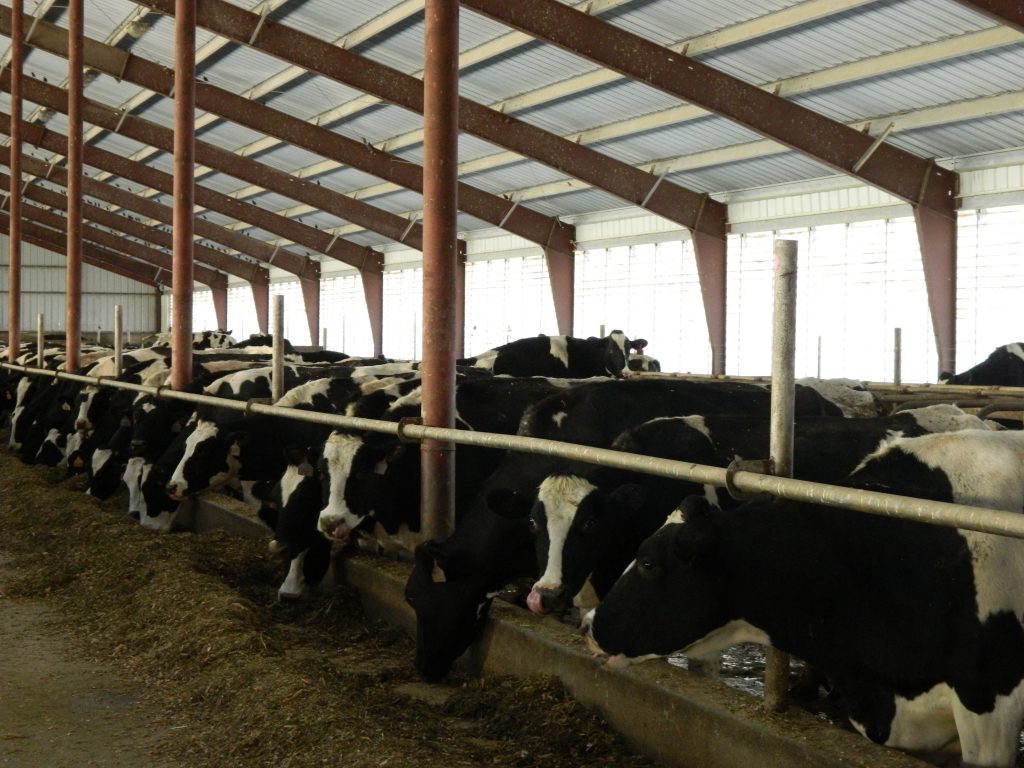 As Savannah wisely pointed out, “All of this hard work leads to milk!”

Dairy cows produce more milk than you might expect. To put things in perspective, one gallon of milk weights about 8.6 pounds. Graham’s cows are producing about 37,500 pounds of milk EVERY DAY! A specially designed bulk tank cools & holds the milk at a food-safe temperature.

Then, once a day a “milk truck” arrives to pick up the milk. 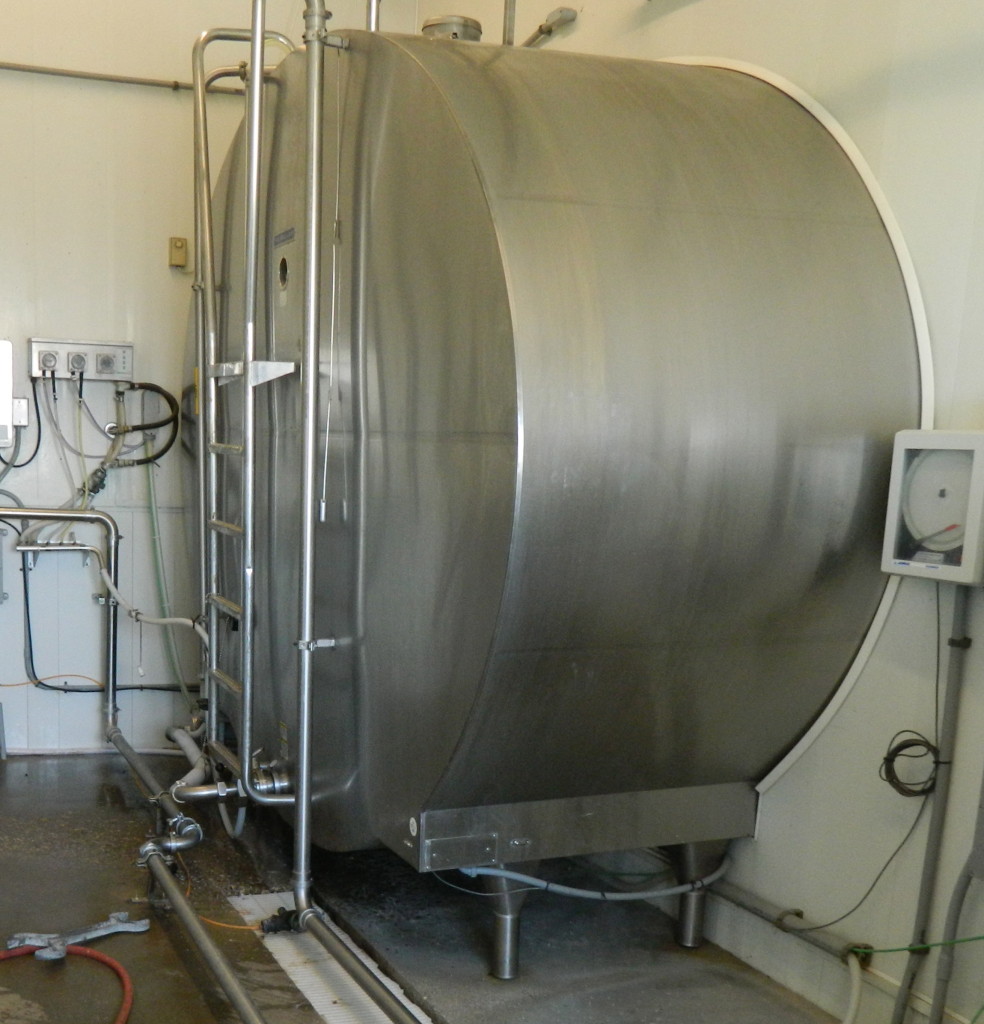 The next time I drink a glass of milk, enjoy cheese on a sandwich or scarf down some yogurt – I admit – I probably won’t be thinking of these dairy cows. I’ll be thinking about how yummy the food is — and, that’s the whole point. Dairy farms in the US (like the Dutch Dakota Dairy) do a great job of providing clean, safe, wholesome products for us to enjoy!

Got milk? Check your fridge…yep! Now, go get some Christmas cookies & have a glass!

Why Farmin’ Friday? Recent statistics show that just 1% of the U.S. population considers farming their primary occupation. Since John & I fall into that 1% group, I believe it is important to share about our work in food production. Since 100% of American’s eat, every Friday I write to those who may wonder: Where does my steak come from? What does a farm look like? Who are the farmers and ranchers? What do they do? Click here to view previous posts about farm life.