The following story is an excerpt from the book I am publishing this winter. It’s a book of wild stories from my grandfather Luther Angell. Luther is an old-time cattlemen, who has a knack for find trouble and then cleverly avoiding the consequences!

For more information on the book’s upcoming publication, please sign up for my “Insiders Only” email list & I’ll keep you updated on the book’s progress.

Luther says, “It seems like there has been a beer joint where The Coronado Inn stood in Columbia, Missouri forever. Longer than I can remember for sure and as long as anyone I knew could remember, too. That makes for a long time! In the early 1950s, it was a popular 3.2 beer joint for the University of Missouri college students. At that time, all that a beer joint was legally able to sell was 3.2% beers. It wasn’t until in the mid-60s that the City of Columbia approved selling liquor by the drink.” 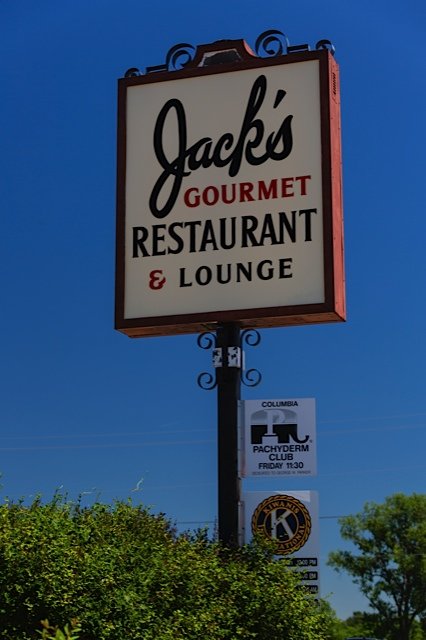 “What do you mean liquor by the drink?” I say.

“Well, before that if you wanted to have a whiskey and coke, you couldn’t order one. That’s liquor by the drink. All the bars could sell was beer with 3.2% alcohol. Folks got around it though; we would buy our liquor at the filling station down the hill and then order a soda. We mixed our drinks under the bar.”

“I didn’t know there was a time when bars could only sell beer.” I say.

“Yep, I have a lot of good memories there but some of the best were in the late ‘60s and early ‘70s. In 1968 a fella named Jack Crouch moved into Columbia from California and bought the popular local honky-tonk. However, Jack’s expertise was in running restaurants and he had plans of adding on and upgrading the Coronado to the first gourmet-dining establishment in Columbia. To Jack, his fancy restaurant just happened to have a bar, this place was no longer just gonna be an old honky-tonk out on old highway 40. The bar kept the name of The Coronado and they added a restaurant called Jack’s Gourmet Restaurant.

Jack was a great businessman and he made it work. It was a white tablecloth kind of place, with candles and polished silverware. The women who dined there were elegant, they wore fancy dresses and expensive jewelry. At that time, everyone in Columbia knew Jack’s Coronado was the finest restaurant in town. The restaurant had a big, wooden dance floor that Jack kept carefully polished. Two or three nights a week, a band was invited to play at Jack’s; as the evening meal progressed they would play softly in the background and some folks would even slow dance as they waited for their meals to be served. This place was now upscale! The beer joint days were long gone!”

Luther still seems amazed at the transformation Jack pulled off, converting the bar into the best restaurant in town.

Even in 2014, although both businesses have changed ownership and the livestock auction is closed, it is surprising to drive down Old Highway 40 and see just how close the Columbia Livestock Auction and Jack’s sit.

Luther says, “However, the people, animals and work going on the Columbia Livestock Auction were quite different than that at the new Jack’s Coronado. But, that didn’t matter, cowboys and salebarn folks are loyal bunch! And the whole lot of us didn’t hold it against them for going upscale. Let’s just say, as far as we were concerned, Jack benefitted from his new upscale customers in the dining room and the old crowd that The Coronado Inn always attracted.”

Luther is smiling wide, he has always loved to play the role of country bumpkin amongst his city friends. To me, it seems, it has always been an act – a joke he played on those high-society folks. He enjoyed seeing their noses turn up and faces wrinkle when he spoke of pickin’ wool off dead sheep or feed fish bones to hogs. Jack’s new restaurant provided the perfect playground for one of Luther favorite pastimes – teasing city folks.

Luther says, “The “boys” that work in the back of sale barns work hard…and they play even harder. After 12 or 18 hours on concrete, in the heat or cold, the boys are not ready for bed. They are ready for a drink! And the nearest place in town that could serve them one was just a mile up the road, at Jack’s.

When the sale got over, cattle buyers, a few sellers and the “boys” would crowd into the bar just like we always had for years. This made all the barmaids really happy. They knew, when the sale barn crowd arrived they would make good tips!”

Luther is proud that he and the sale barn crowd still held the esteem of the staff at Jack’s. They might stink a little more than the other folks, but they tip just fine!

Luther says, “One night me and the wife was in there eating supper when Jack came over and sat down at the table with us. He said, ‘Luther, last week after you boys were here, I did something that I have never done before, heck, it was something I never dreamed I’d have to do.’

‘After you boys left,’ Jack said, ‘I had to clean that dance floor with a scoop shovel because there was so much cow shit on it!’

Thank you for reading, I’d love to hear your thoughts on the book! Have you ever eaten at Jack’s? Did this story stir up any memories of a favorite bar for you?