Excerpt from the book: Slop for the Hogs
← Book Review: Show your Work! Six signs it is fall in South Dakota →

Here is another story from the book I’m publishing this winter about my wild grandfather, Luther Angell. In this story, he tells me about feeding hogs as a kid with his father, brother and sister.

I always think of Mike Rowe’s show “Dirty Jobs” when Luther tells this story. As you will read, feeding the hogs was certainly a dirty job! 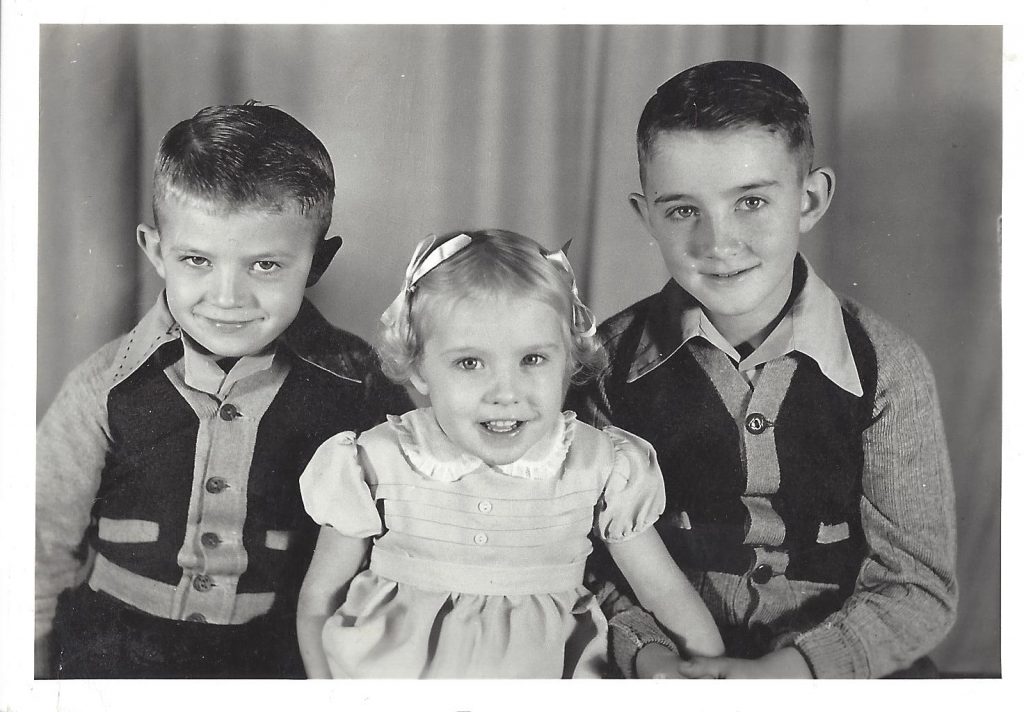 Left to Right: Buddy, Rosemary, and Luther Angell. Circa 1945

Slop for the Hogs

“During World War Two,” Luther continues, his face gently lit by the reading lamp beside his chair, “L.W. came up with another big idea for us kids. He decided that our family would collect all of the edible garbage from the restaurants in Centralia. Then we would feed the scrap food to our hogs.”

“Free feed!” I chime in, remembering how L.W. enjoyed lowering his cost of production. It was a survival skill he learned after his father passed away. In time, it simply became a habit.

Luther smiles and says, “He put a 50-gallon barrel in the alleys behind each restaurant’s kitchen. Then, he worked it out with the cooks and the bus boys. They would throw the scraps into those barrels. To collect the scraps, we used our family car. Not a feed truck, our family car!”

L.W. thought this plan would work out well. With it being wartime, no one could justify wasting anything – even food scraps. Many of the bus boys were happy to take the extra steps out to the back alley to toss the scraps – it was damn near patriotic. Louise didn’t have much to say when they started using the car to haul the scraps; it was just easier to get around town that way.

Luther continues, “L.W. would take the seats out of the back of the car to make room for all of the five-gallon buckets we filled by dipping the scraps out of those big barrels. We drove down the alley and pulled the lids off the barrels. They were full of kitchen scraps that were two or three days old. Collecting and feeding these scraps was a bad job in the wintertime because of the stink, but in the summertime it was a really bad job! The summer heat soured the scraps.”

As Luther stared over the edge of barrel, he cringed at the sight below. There were half eaten hamburgers, soggy fries, pancakes, cottage cheese and crusty dinner rolls – and that was just the top layer. After L.W. pulled another lid off, an odor – a mixture of a week’s worth of diner food – escaped. Luther resisted the urge to gag.

Luther says dramatically, “You just can’t imagine, much less describe that kinda stink. What’s worse, you can’t imagine the mass of flies that them scraps attracted. You just couldn’t get away from that many flies. We spent our mornings driving all over town collecting scraps and then we drove out to the hogs. At the time, we were keeping our hogs a mile or so west of town. L.W. had a 12-inch plank that we laid across the buckets. He instructed us kids to sit on the board in the back of the car. Our weight and the board kept the slop buckets from tippin’ over while he drove. During all that driving around town, it seemed that every day some of that soured slop would splash over the edge anyway. Of course, it sank into the carpet of our family car. After a while, the back of our car got to be pretty rank. We always drove with the windows down, leaning out. I felt a little bit like a dog, trying to get some fresh air. I bet there was a green stink cloud that followed our car, just like a cartoon. If it wasn’t stink…it was the damn flies following us from town in a black cloud!”

Luther is getting really revved up now. If he were telling this story in a barroom, the crowd would be zeroed in on him and laughing at the thought of 10,000 flies following the family car.

Luther continues, “When we got to the farm, we ran the hogs out of the lot. We had to get them out so we could pour all the slop into several large wooden troughs. If the hogs were in the pen, they would knock us over before we got the slop spread out. To make this job worse, somebody went and told L.W. that hogs would choke and die if they ate fish bones. After that, he started making us sort through the slop. We had to run our hands through the scraps after we dumped them into the wooden troughs.”

Louise likely had to hose her dirty children off in the backyard before allowing them to come into the house to clean up and bathe after this dirty job. The cold water from a spouting hose might have sprayed away the leftover food scraps that were stuck to their clothes, making Louise’s washing easier, too.

He continues, “The flies would still be giving us fits. It didn’t take long for hundreds of them to swarm around me. I’d sort and pick out the bones as fast as I could, but the flies would get to buzzing in my ears. Those flies were enough to make me crazy!”

He waves his arms around his ears and face wildly, as if a swarm of flies has just invaded the peaceful living room.

“They were so thick and aggressive, they would go in my nose and I’d be spitting them out my mouth,” he explains. “There was nothing I could do when them flies landed on me, tickling my skin, because my hands were covered in slop! So, we just tried to be tough while a cloud of flies tickled our faces, pickin’ fish bones out of that sour, stinky slop. L.W. was sure happy to take advantage of that opportunity, since we was feeding our hogs for free. But for me, I still remember it as a pretty bad job. Looking back, I don’t know why he didn’t just ask the bus boys not to put the damn fish bones in the slop barrels in the first place!”

Thanks for reading this story! I hope you enjoyed it. If you’d like to be added to my special e-mail list regarding this book, please sign up below.