There were a few things about this kitchen that made me feel like I was in a farmer’s shop or auto body lunchroom instead of a kitchen. I’m guessing these silly things will make gals giggle and guys get defensive. For those who favor the male side of this melodrama, don’t worry. The men on this farm still have a 4-wheeler, a loader tractor, a big snow-moving dozer thing, pliers on their belts and plenty of other ways to feel manly. The way I see it, making the kitchen a little more domestic isn’t going to hurt one bit.

The giant trash can was handy. It did not need to be emptied very often. However, it got a little stinky by the time it was finally full. 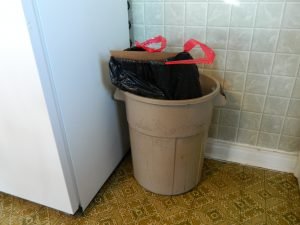 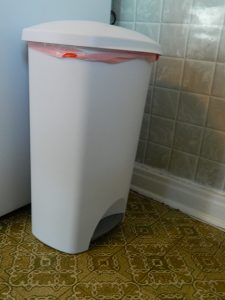 John seemed to always have a little pile of stuff right on the corner of this counter where I am generally trying to prepare food. Its not just him, I leave my stuff there, too! I figured it was a natural dropping off spot. Rather than try and change both our habits, I just tried to make it cuter. 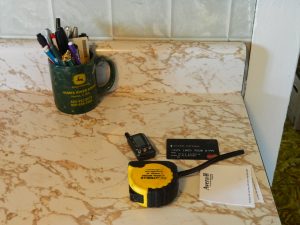 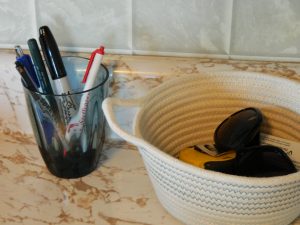 Thank you Target for this lovely blue, colorwash basket. 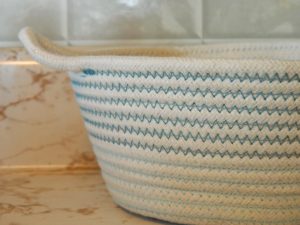 It turned out John was a little emotionally attached to the mug. He got it when he purchased his baler. So – rather than get rid of it. He is using it for pens on his desk now. Everything has a happy ending.

The lava soap really made me feel like the kitchen sink was at a tire & lube shop. It is one thing if it was actually filled with lava soap. I know – lava soap rocks if you’ve got greasy hands. Nothing can beat it. But, this one had been filled with Dawn, there wasn’t even lava soap in there. So – I got a regular bottle of hand soap. 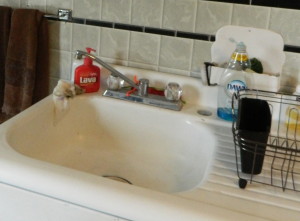