A very nice person at Lowe’s led me to these plastic backsplashes. I would have never found them on my own. 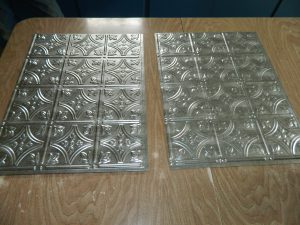 Since they are plastic, they are much simpler to install than a traditional tile backsplash. The traditional tile backsplashes involve grout and several other steps that looked overwhelming to me. These pieces are 24 in long x 18 in wide. I wasn’t sure if Ron & John would like the idea of a backsplash, but they surprised me. They loved it. I didn’t realize it, but they were not looking forward to the task of cutting small pieces of paneling during our next project to put between the cabinets. They were very excited about the backsplash because it was going to make the paneling process quicker & easier. I am very thankful for that man at Lowe’s!

All of the supplies for this project that come from Lowe’s are sitting together in the store. It was very simple to find what I needed.

1. Measure your space. Ours was one foot between cabinets. 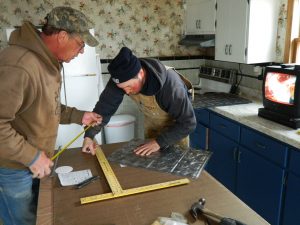 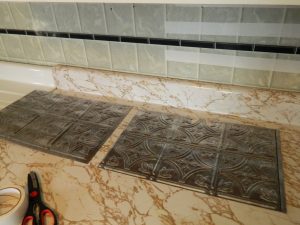 3. Put tape on wall. Peal off white plastic protector, so both sides are now sticky.

4. Line it up & stick it on. No sweat involved. No mixing of concrete putty & grout for a “real” tile backsplash. 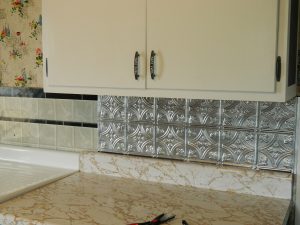 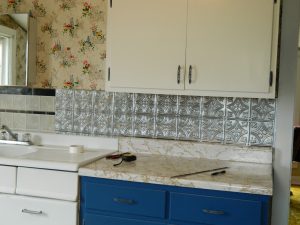 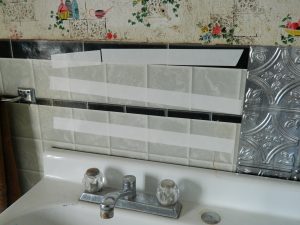 5. When you get to the edge, tape the trim edge piece onto the last section. Then, peel off white so both sides are sticky. The edge piece gives a clean & finished look. 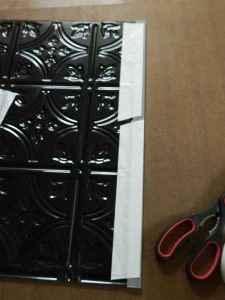 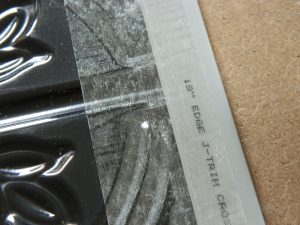 Work from left to right. We did not do this on the first wall so it was harder to get things to line up and the layers to stay hidden. Much easier on the second wall working left to right.

Pay attention to the pattern. The most challenging part of this process is keeping the patterns matching. Don’t accidentally cut your piece & put it on upside down.

Buy a few extra. Like John Wayne says, “It is better to have it and not need it, than need it and not have it.” In his case he was talking about a gun. I’m talking about saving a trip to Lowe’s if you make a wrong cut. It is easy to return what you don’t use.

Quirks of an Older Home

Of course, we were bound to run into something interesting while working on these 5 steps throughout the kitchen. Like this grease fire of days past. Once we pulled down some loose wall paper & fake tiling we found this fire burned spot which had been covered up. Yikes. 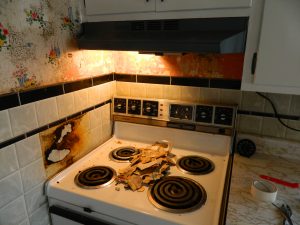 Another time, we pulled some wallpaper down & a little poof of brown dirt fell onto the countertop. Ron said, “Yep, that blew in during the dirty 30’s.” 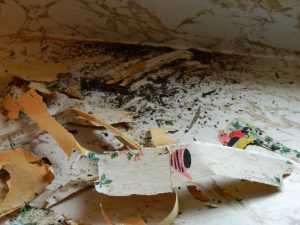 Check out these layers of wall paper. The orange-ish stuff on the side is plaster. That’s what they use before drywall was invented. It is very messy stuff, but also very tough. 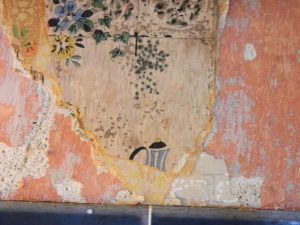 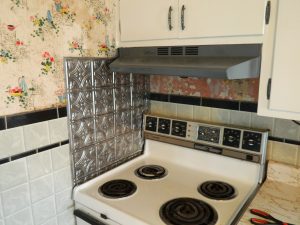 Even frozen pizza looks better next to this fancy backsplash! We are really happy with the finished look. I would even recommend it for a modern home. 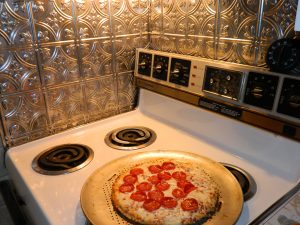 This was an easy project it took about 15-20 total “man hours.” Ron & I worked on it together. The sheets are about $20 each. We used 6 on each wall. So, yes, it did add up. However – we decided the cost was worth it for two reasons.

A while back when we had gone backpacking through Australia I had seen these backsplash covers at our Air B&B. As the hotel had a tie-up with a bond cleaning service in Canberra; thus, we were shocked by how easy it was for them to clean the places where this backsplash was placed. 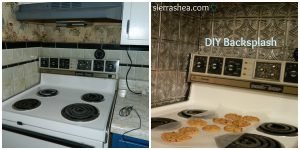 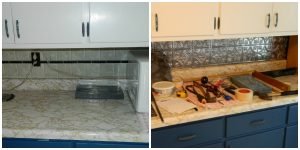 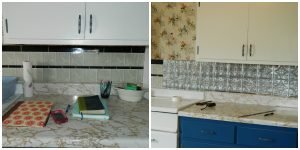 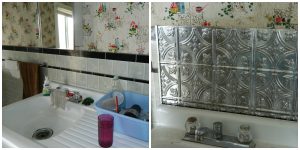 Thanks for reading! Sierra Shea