After the kitchen, we began tackling the dining room. This is now my “studio” for sewing and writing. However, the room had one major problem. The outlets did not have grounds. That means if lightning strikes my computer DIES. That means, I have a meltdown. I’d rather rent an office in Lake Preston or DeSmet than plug my computer into an ungrounded outlet. At first John wasn’t too concerned. Finally, I explained the situation to John in farmer terms. The whole computer thing wasn’t really registering with him.

I said, “Losing my computer would be like every one of your tractors burning to the ground. I need grounded outlets in this house. PLEASE!”

Finally, he understood. We bought the supplies and on another late night, the four of us installed not one but THREE grounded outlets into the studio. I am so thankful this was possible!

First, we had to cut a whole in the plaster and lathe. This was messy. 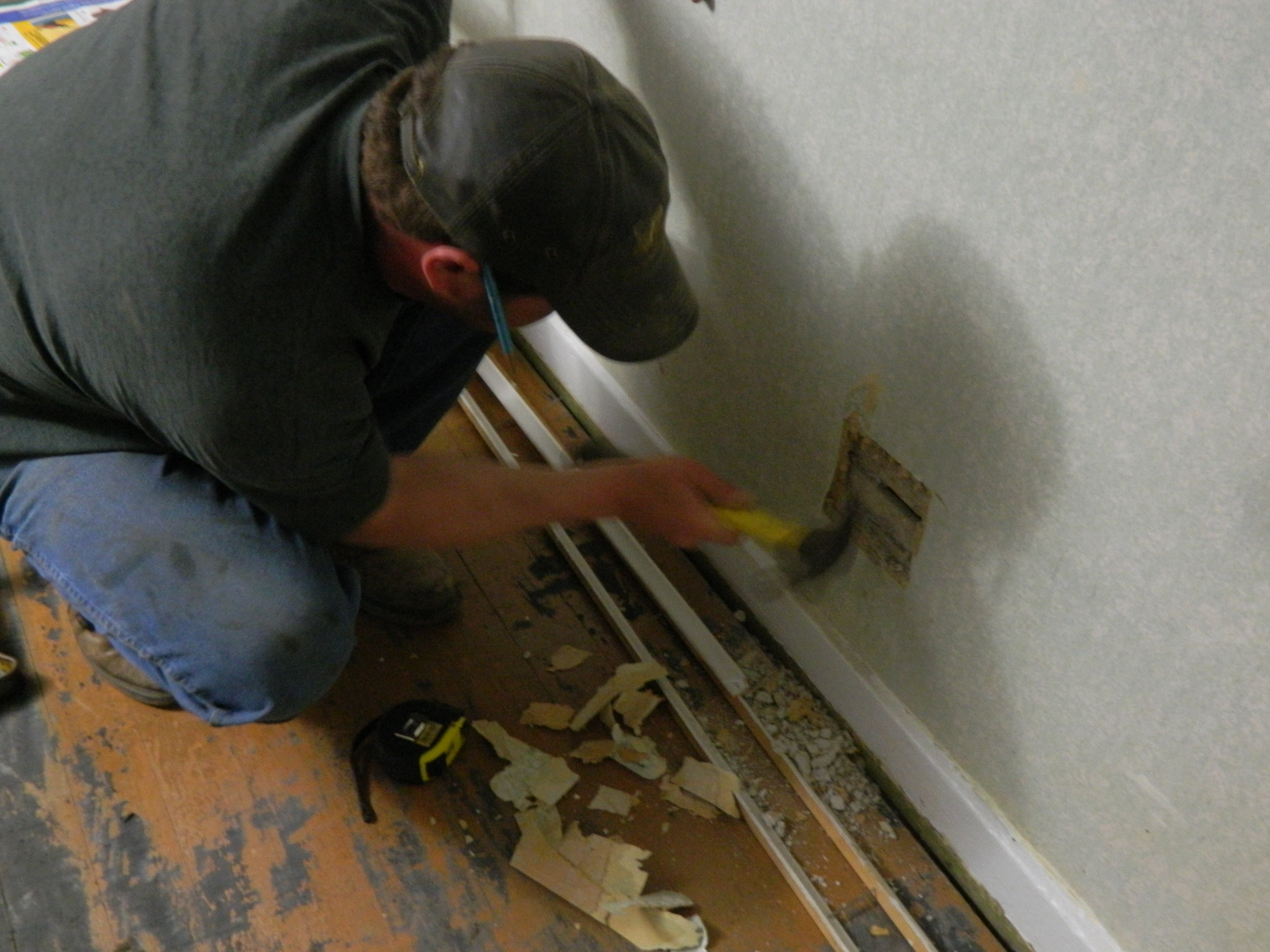 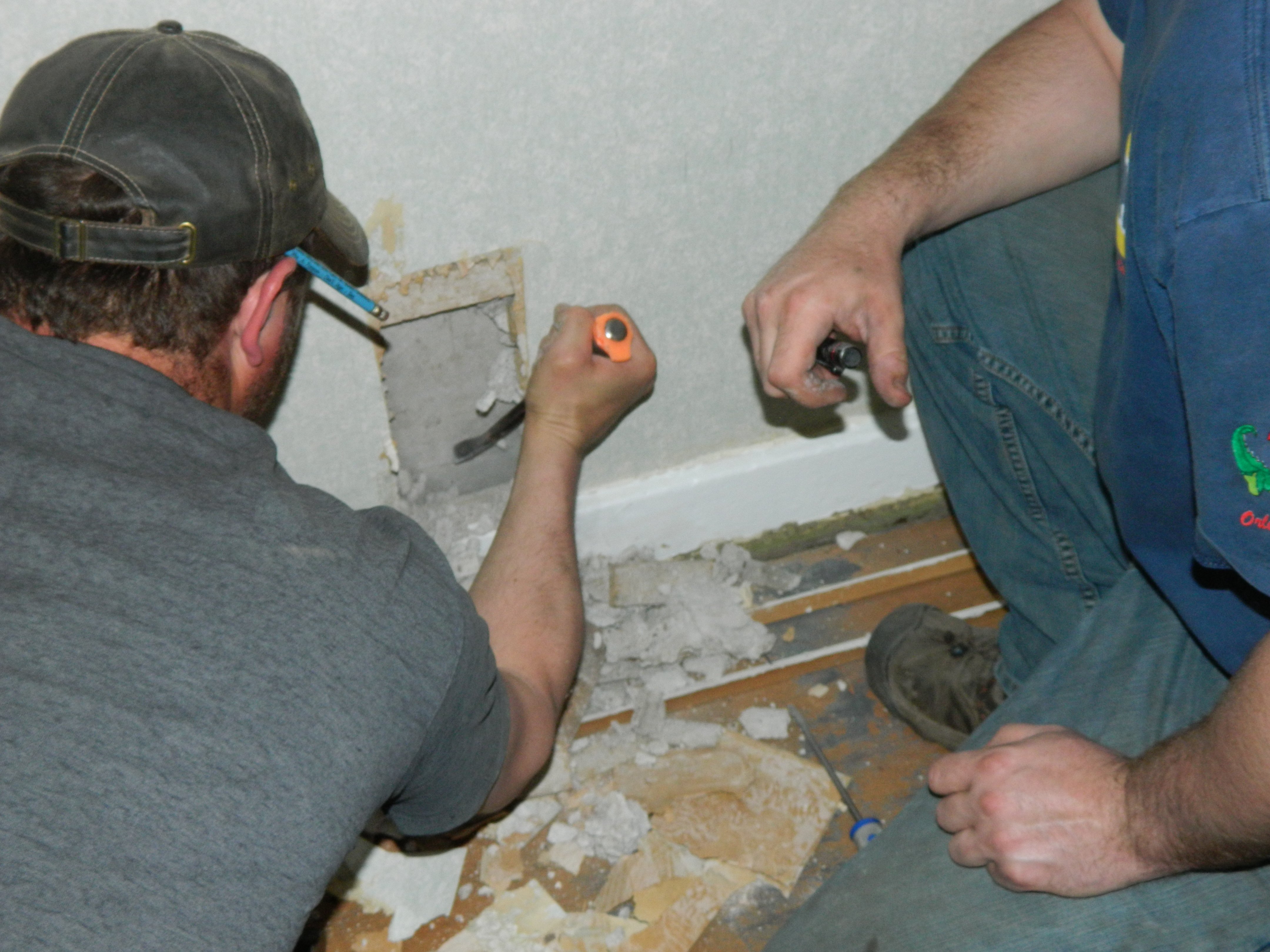 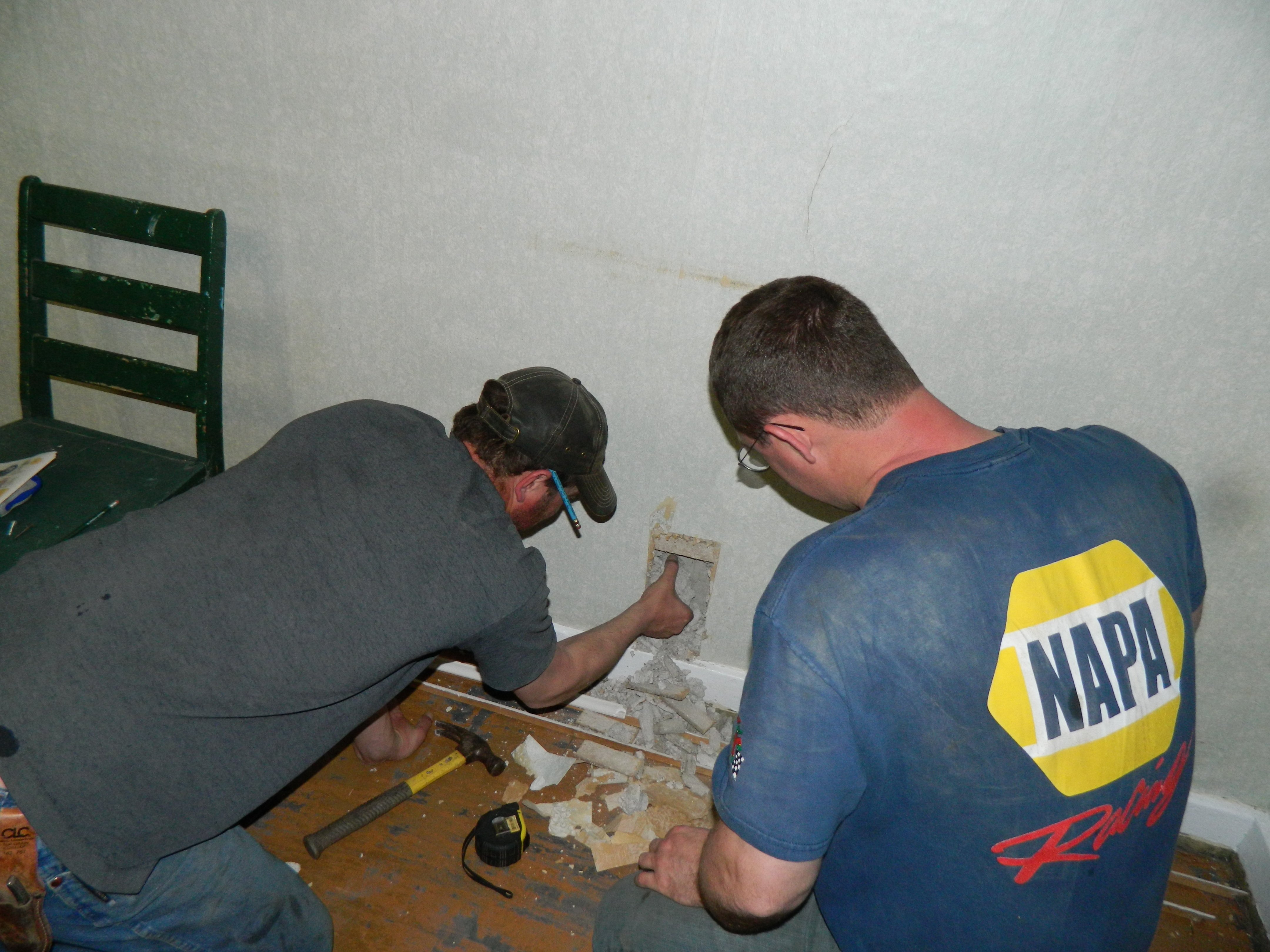 Then, when we were pulling stuff out of the walls we found the most amazing item. This house was built in an era before people trusted banks. They often kept large stashes of money hidden in mattresses or walls. Occasionally people would pass away without telling relatives about the stashed wealth. We found these in the wall in a small box: 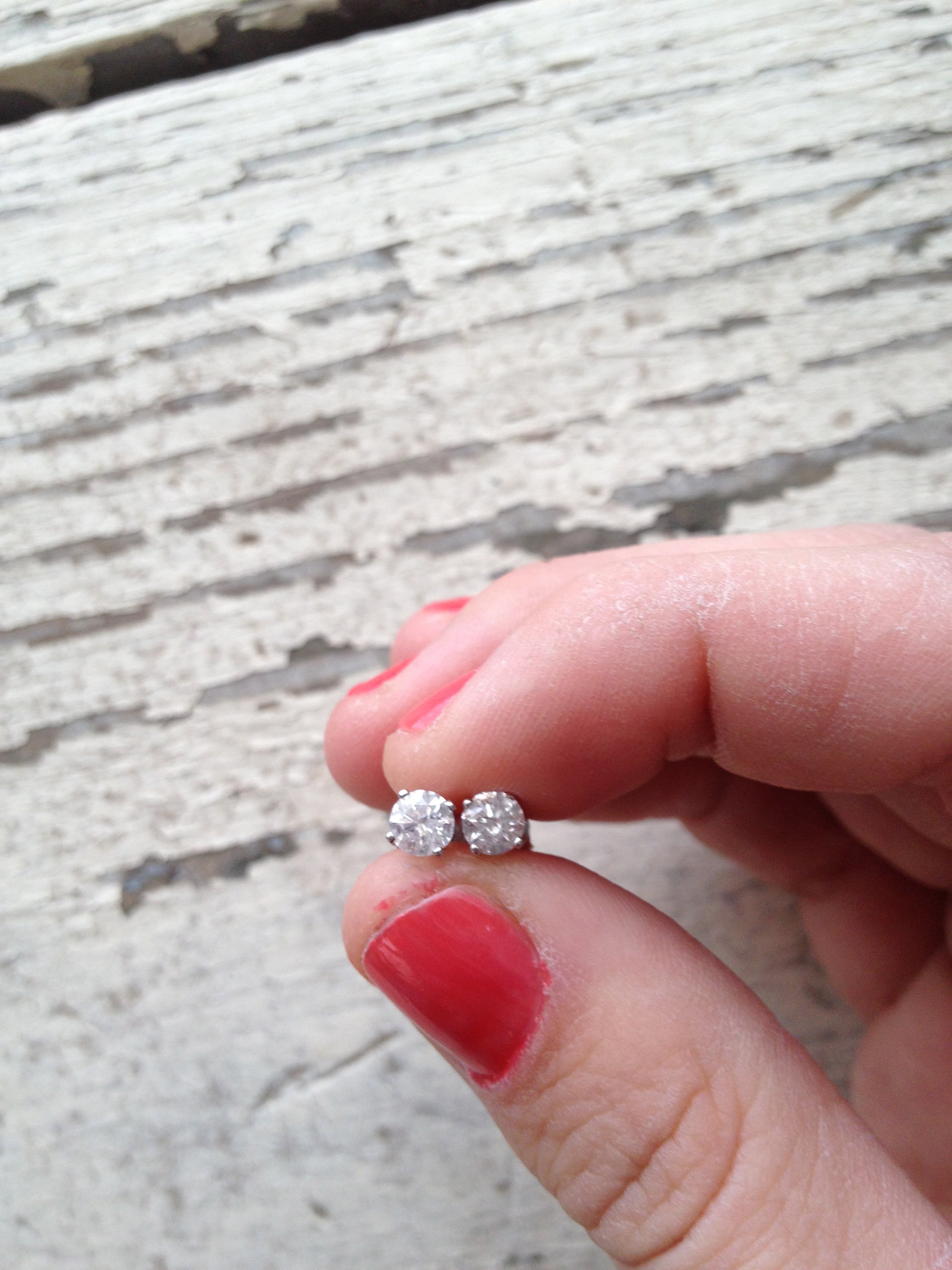 Diamond earrings! John and I have decided to sell the earrings, move to the islands and retire. Just kidding. I made all of that up. This is what we actually found: 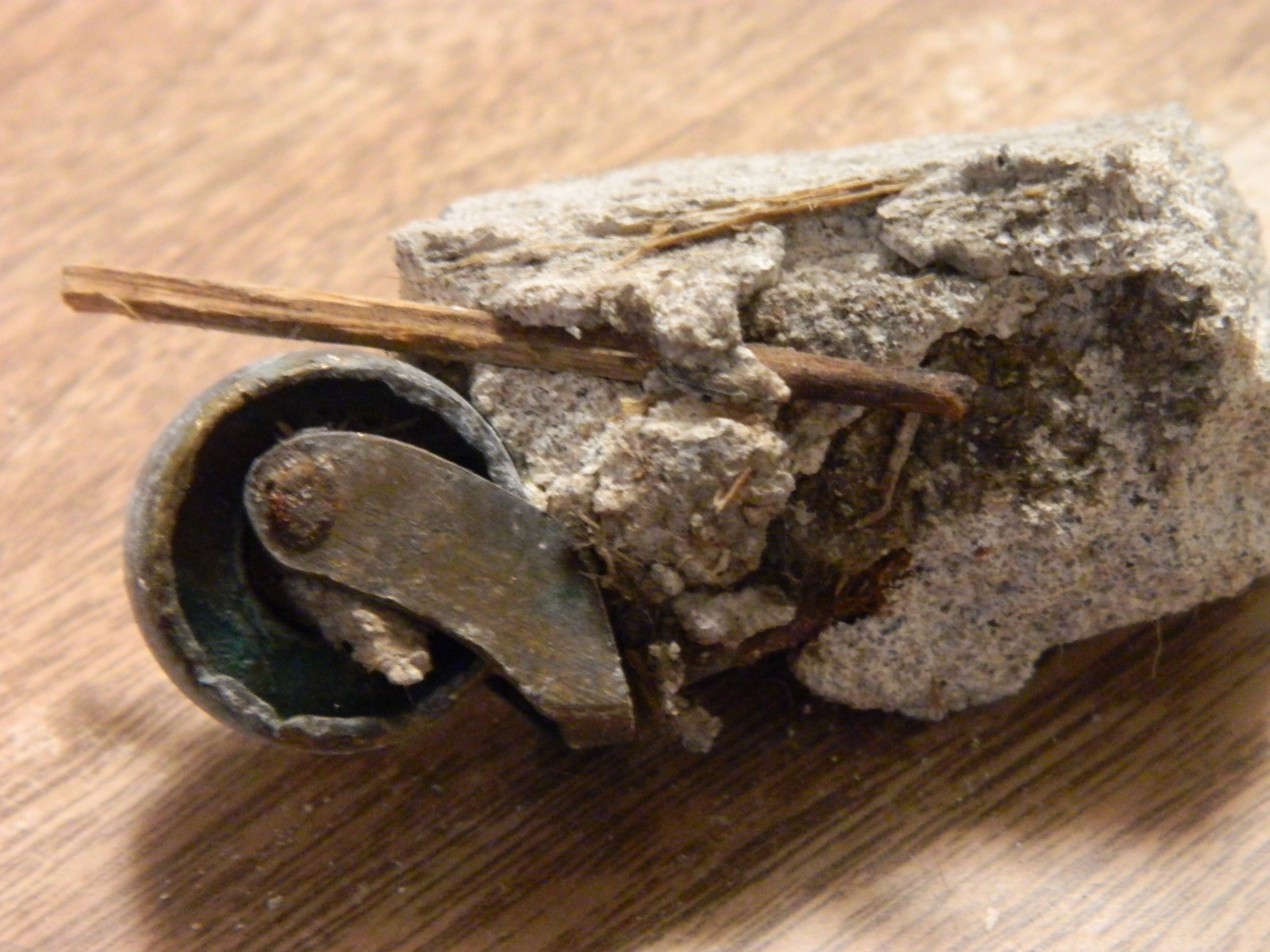 A genuine brass wheel, with fabulous 100-year-old straw. Not exciting! Not hoards of cash or jewelry like we hoped for. Apparently, they used anything to fill the walls up. No telling what other “junk” they tossed into the walls.

Once the hole was complete, we had to run an electrical cord into the basement. John was definitely the hero of this project. He squeeeeeezed into the tiniest hole ever and drilled a hole into the floor so we could bring the cord down. It was quite hilarious to see him climb in there. 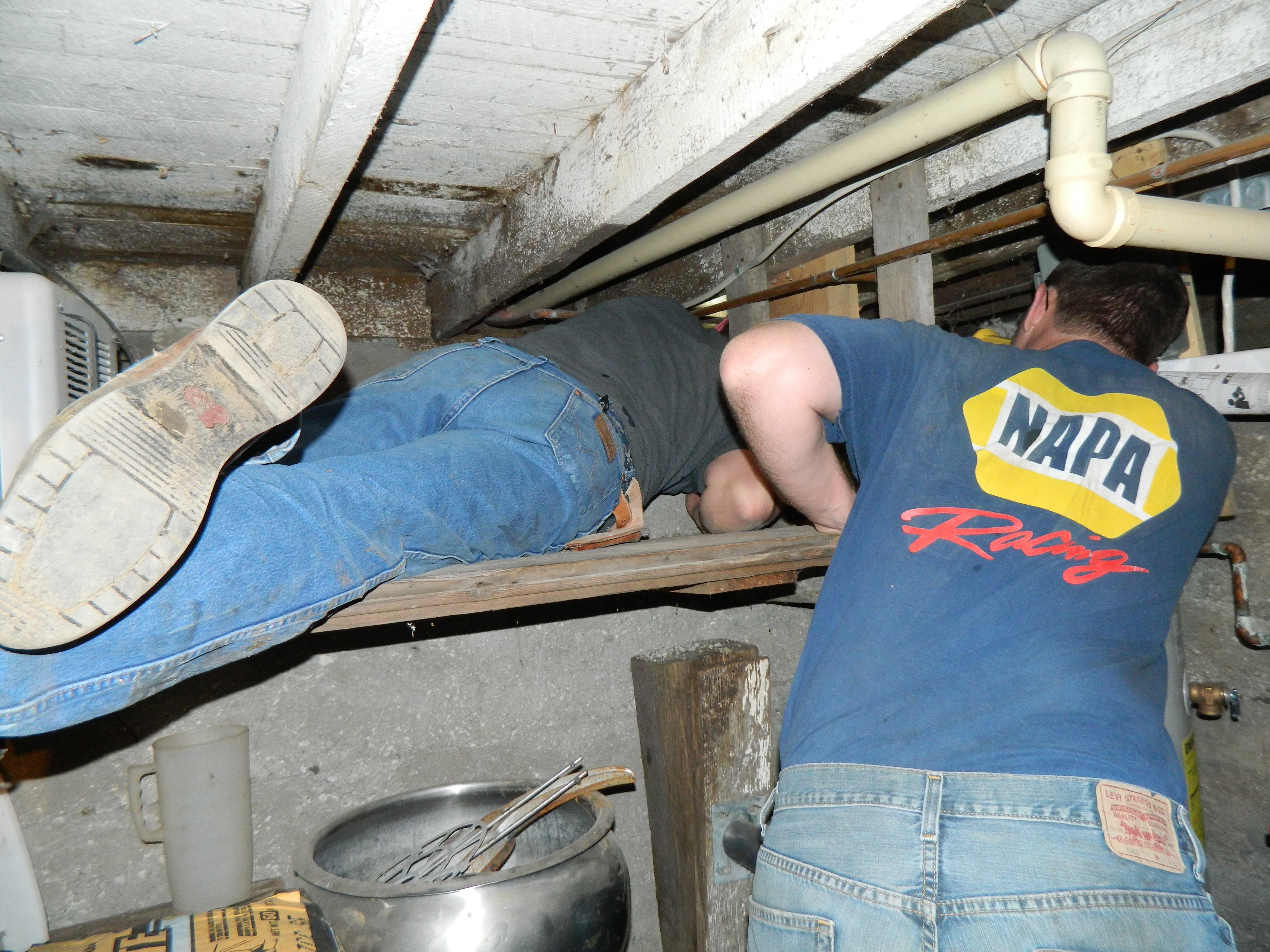 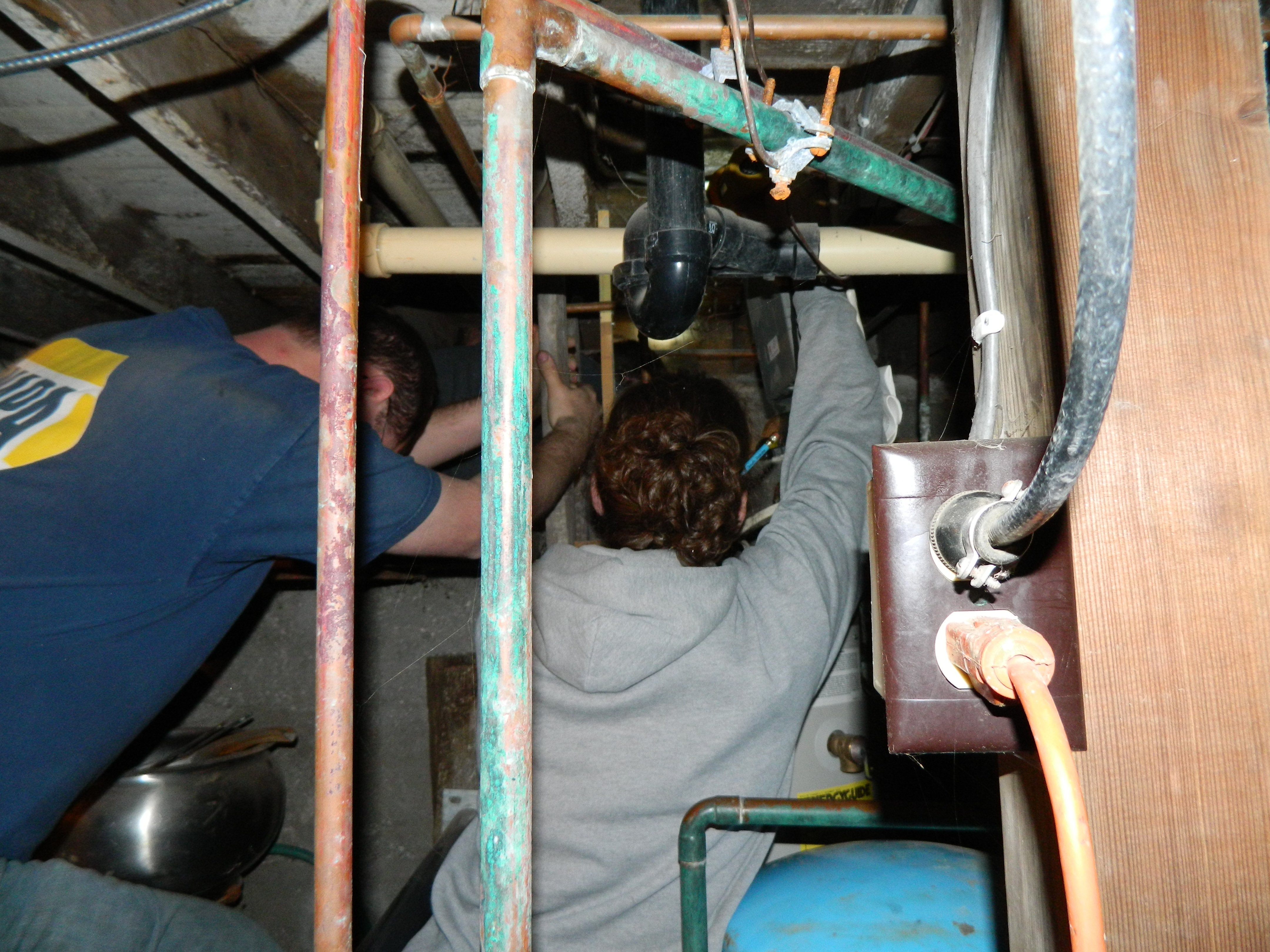 He was red-faced and sweaty by the time he finished that awful job. We got quite the chuckle out of the whole ordeal. I am not sure why though, maybe at 1 AM everything seems a little bit more ridiculous and comical. 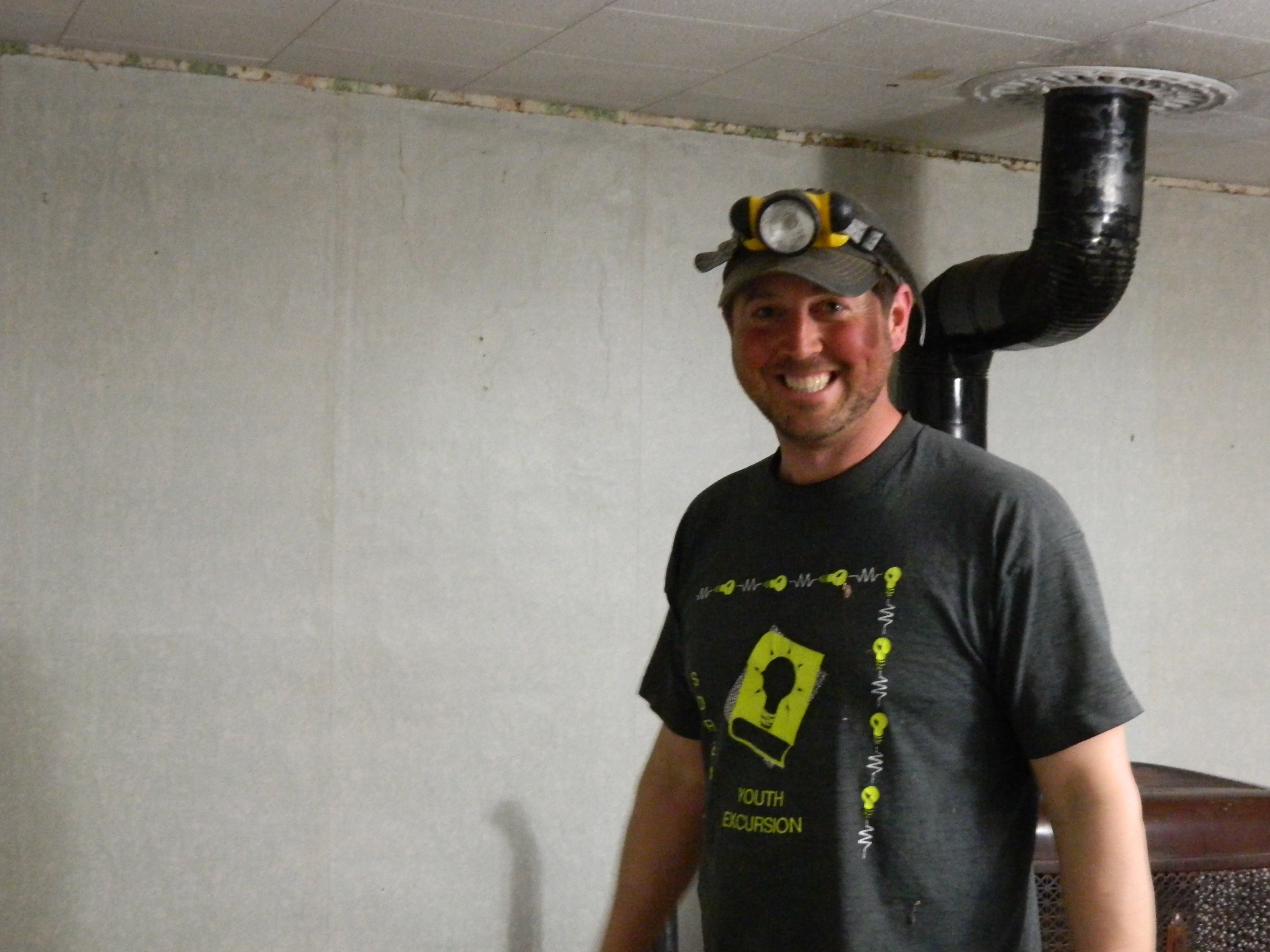 Then, next messy project for the night was getting ready to panel the walls. John and Jeremy noticed that the wall had bowed out where the oil burner used to sit. So, they made another big mess to flatten it out. 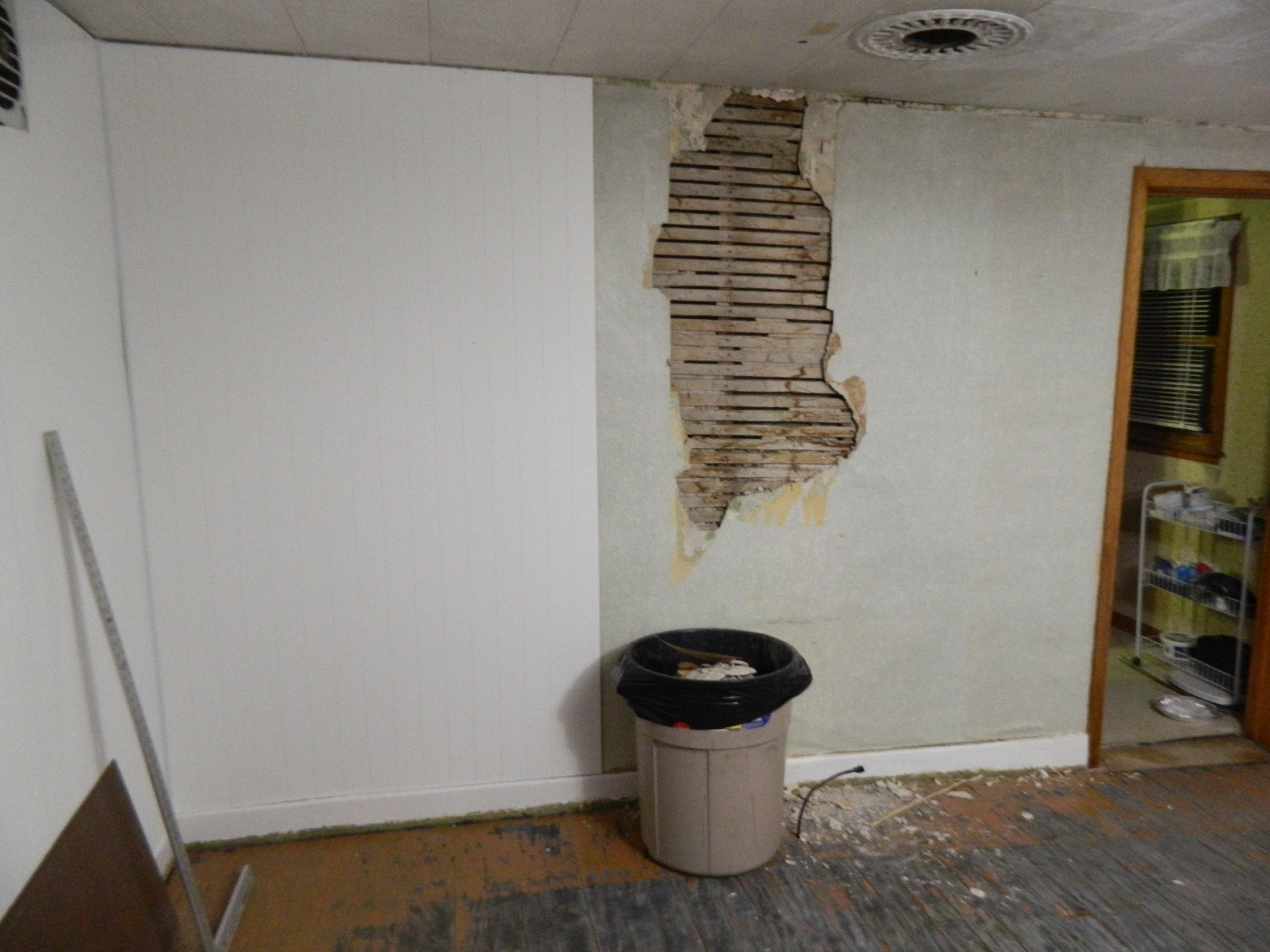 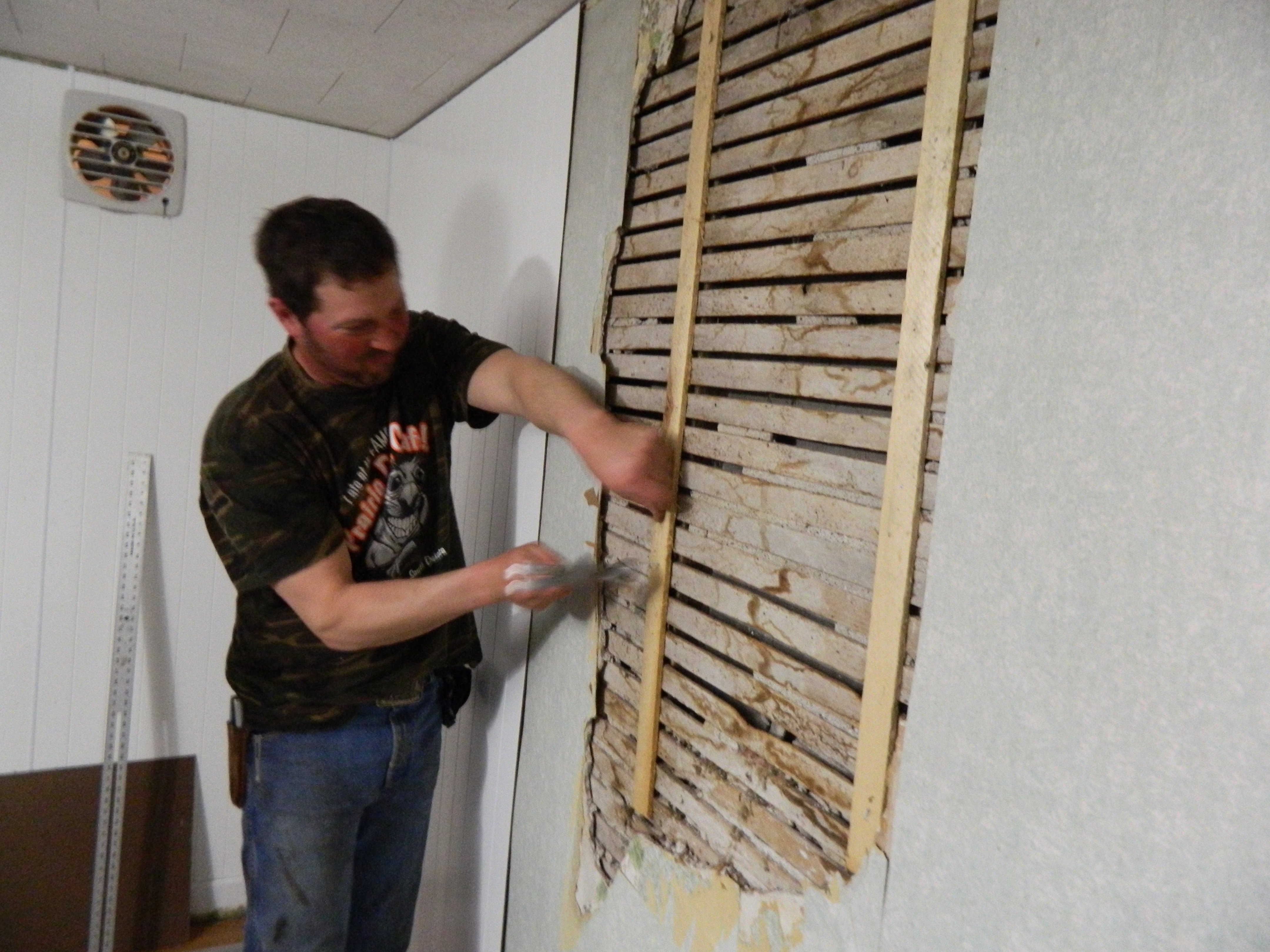 Within a few more nights of working at the paneling. The wall looked nice and white! 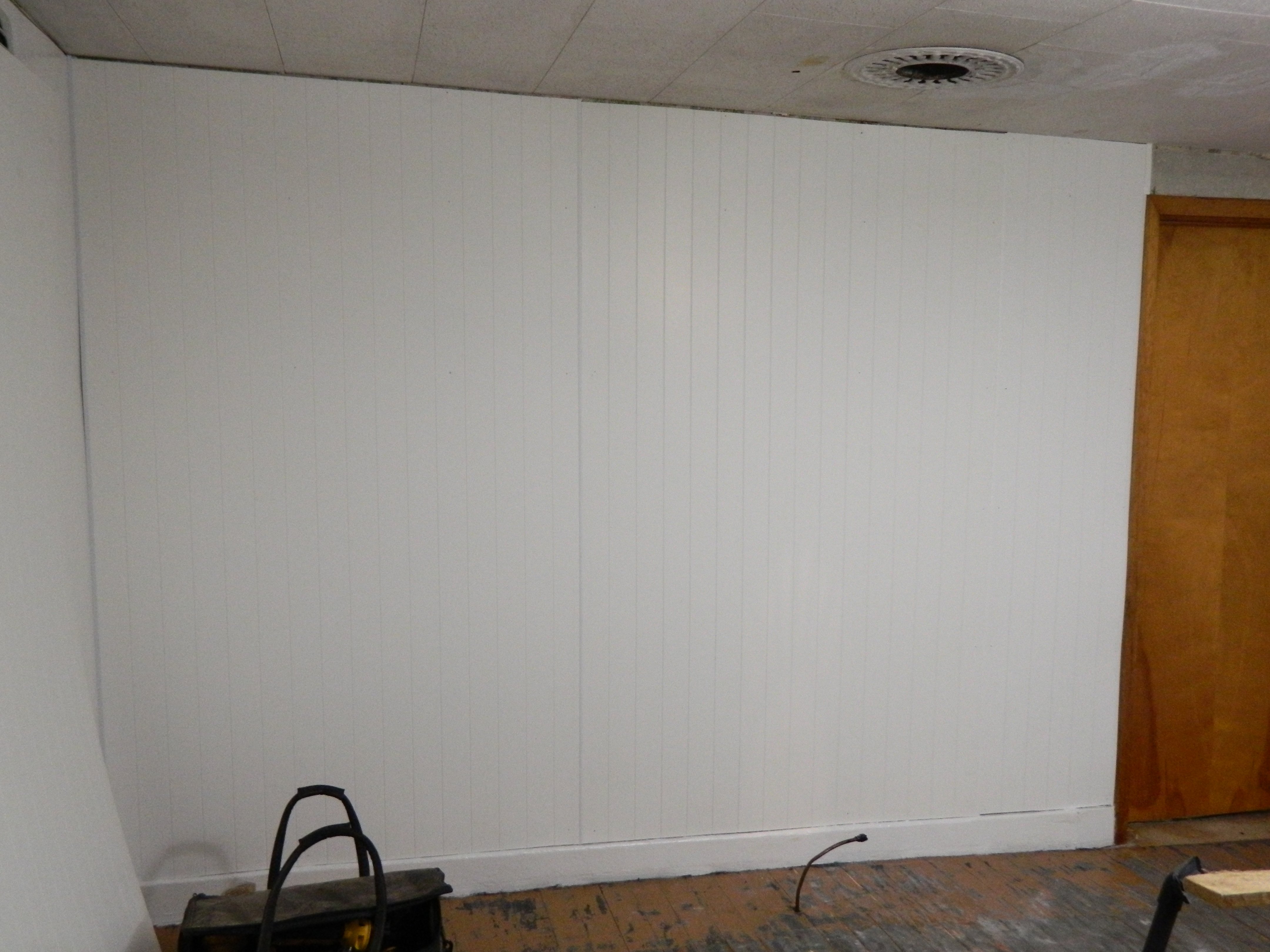 The other walls are white now, too! 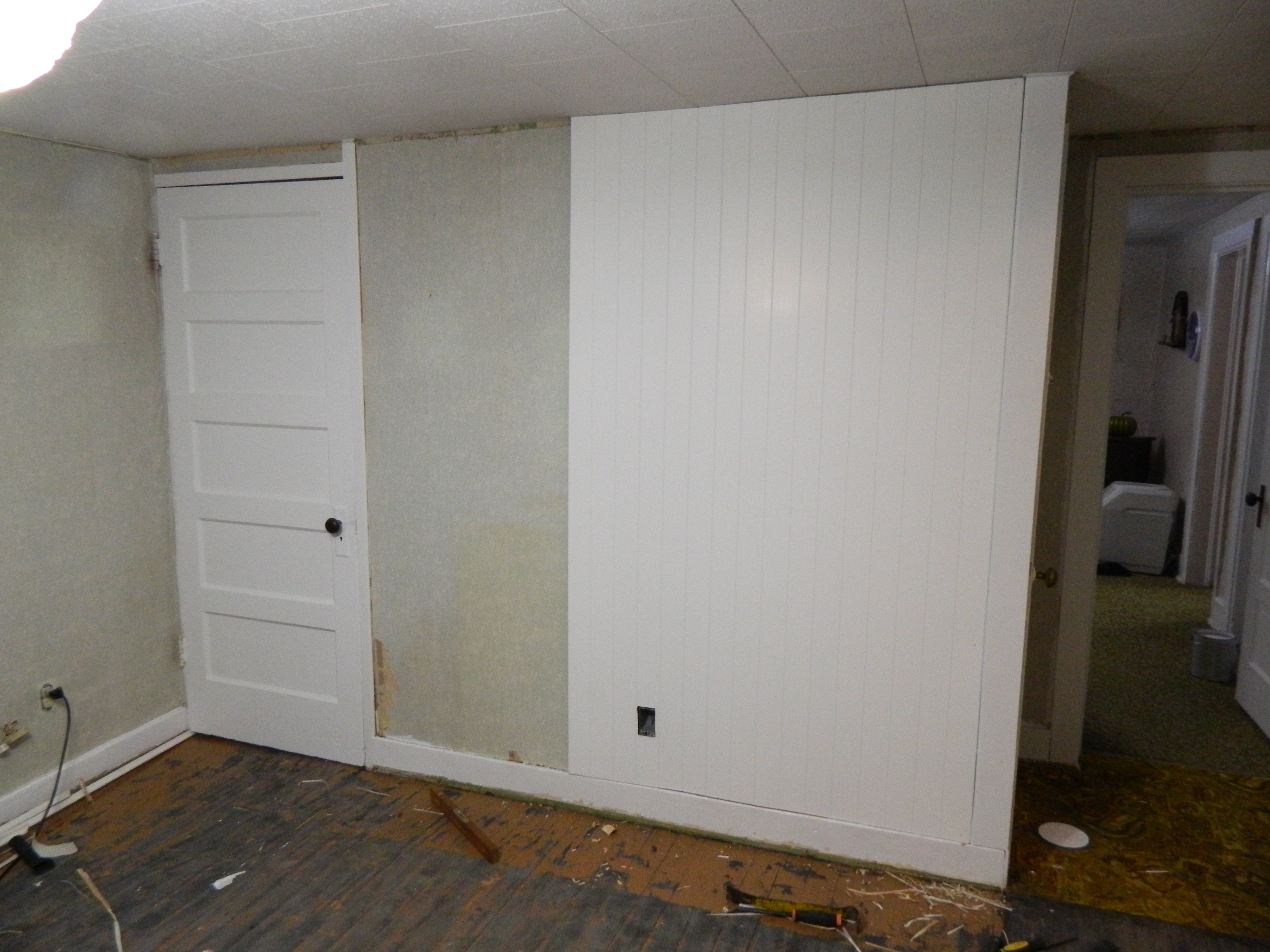 While I was in Missouri a few weeks ago, they put in the carpet. Now, the room is starting to shape up. I even got to hang two mirrors! 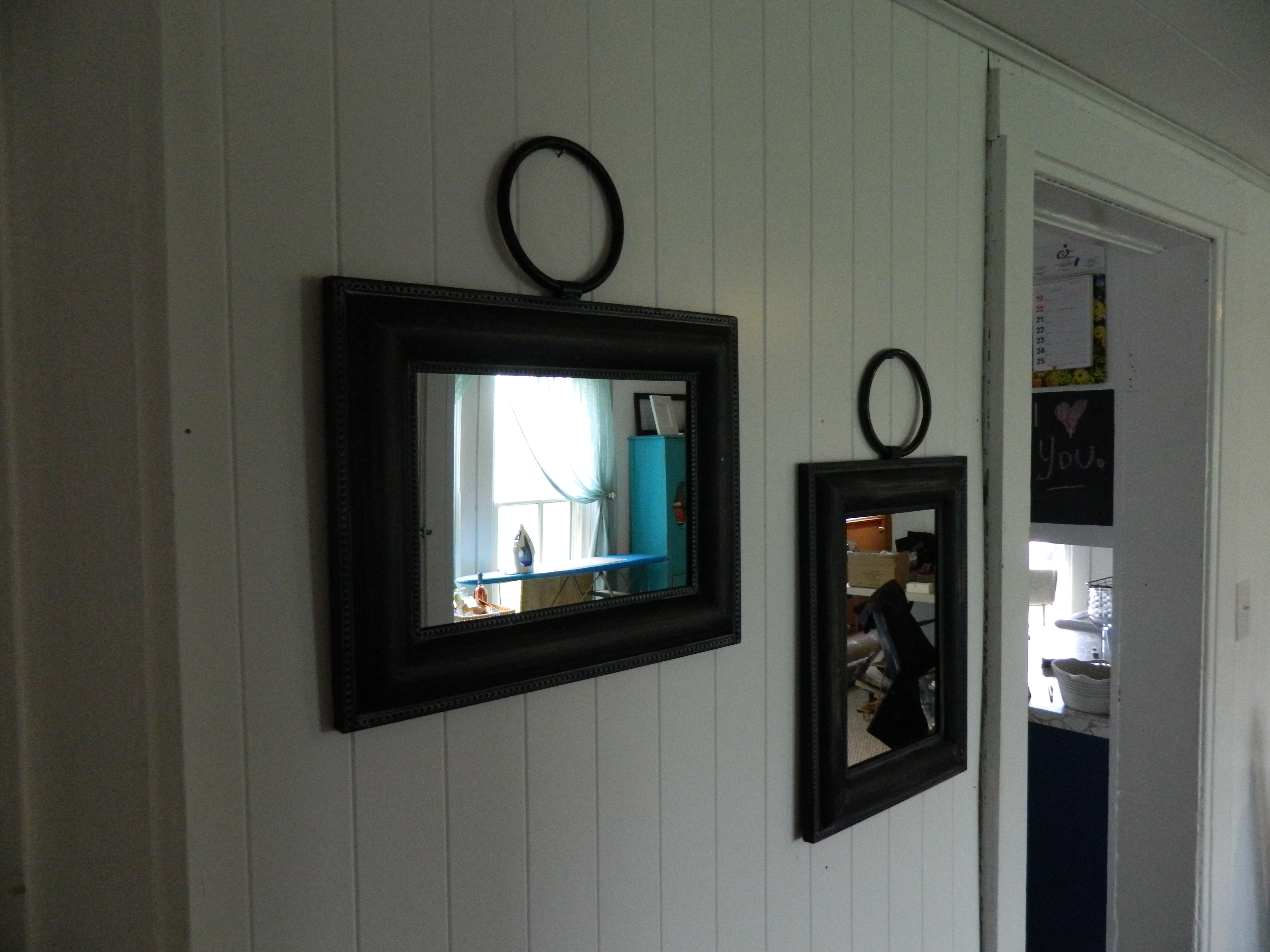 This is our process of fixing up the living room, so far so good! Our next big challenge is possibly replacing the oil burner with some other form of heat.