If you are looking for a good read, may I suggest this book? Laura Ingalls Wilder: a writer’s life.

If you grew up reading the Little House series, I think you’ll find it interesting. This book wrestles with the claims that Laura didn’t actually revise and edit her books. Some say, that most of the credit should have gone to her daughter, the real writer in the family, Rose Wilder Lane.

Wilder’s Little House books were based on her life, they were not an autobiography – they were a creative work. Which means, as an adult, you might enjoy learning about the facts – and trials – that Wilder left out of her children’s books. You might also thank her for leaving out those details, your childhood was sweeter because of it.

However, what I found most interesting about the book was the short section about the Wilder’s home on their Rocky Ridge Farm outside of Mainsfield, Missouri. Visitors today can still visit and tour this home. Even though I grew up in Missouri, I haven’t visited the home. But, after reading this book, it is on my list of places to travel.

“I have a fancy,” Wilder explained in 1920, “that the farm home should seem to be a product of the soil where it was reared….Such a house, well built, will last for generations.”

“So far as possible, everything used in the building was to be a product of the farm, both for the sake of economy and because of the sentimental idea that we wanted house actually to be a part of the farm.” Wilder said.

“When the couple began talking about building in earnest, Manly (Wilder’s husband) apparently argued to keep adding on – one box room at a time with stairs and a loft. That was not what Wilder wanted: “There was material on the farm to build any kind of house, I argued, so why not build a real house instead of an addition that would make it look like a town house in the poorer suburbs? That kind didn’t belong on a farm, I insisted. I wouldn’t look right among the trees, with the everlasting hills around it.”

Now here is a woman I can relate to! She is just as sentimental about her farm as she is about her home. After all, she only demands that the grandeur of the home should match the beauty of the setting. I appreciate her pride in the Ozark hills, although I grew up on Missouri’s flat prairies.

“Wilder’s idea for the farmhouse was exceptional, especially given the time and place. In remote Wright County, Missouri, most farmhouses were exactly what Manly advocated for – a room added on here and there without a master plan.”

I live in one of those types of houses right now. It has been added onto at least three times.

“With her vision of how the house would seem to organically spring from its surroundings, Wilder brought originality and creativity to the project, much in the tradition of the nineteenth-century British Arts and Crafts Movement, which valued local materials, traditional craftsmanship and a natural aesthetic.”

Here is where I began to see something new. I have, at times, too narrow of a focus for my creativity. Because Laura was a farm wife & writer – I had limited her creativity to those two regions. I never expected her to be an architect and interior designer, too.

Inadvertently, I also limit my own creativity to whatever region I think I should be focused on at the time. I imagine we all do the same with our creative energies.

“The finished farmhouse at Rocky Ridge is, in many ways, a work of art, as original in its own way as Wilder’s fiction. From its massive beamed ceilings and open stairway in the living room, to the three massive rock slabs that form the fireplace, to the building cabinets and bookcases in the dining room and library, the entire house creates a storybook atmosphere. Yet its story could only unfold and having meaning in the Ozarks. Manly and Wilder even found a “backwoods carpenter” with traditional training to smooth the oak boards and fit them together seamlessly.” 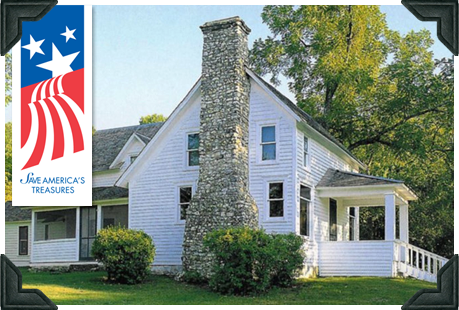 It is gorgeous isn’t it?